Car depreciation isn’t the first thing that springs to mind when you’re in the market for a new car. However, it is one of the most expensive factors that should be taken into consideration when you purchase a new car (along with fuel, tax and servicing costs combined).

Car depreciation is the difference between what you pay for your car when you buy it and what it’s worth when you come to sell it.

This may seem like a fairly straightforward calculation, but cars differ so greatly in value due to so many factors, placing an exact value on depreciation can be complicated. As well as age, car depreciation is affected by its mileage, its condition and even the different brand’s models.

One thing that is consistent is that car depreciation is like a bell curve: flattening out at the bottom, the older your car becomes. 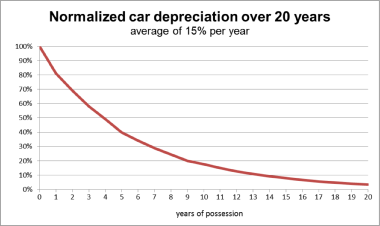 What is the average depreciation of a car per year?

How is car depreciation calculated?

To find out how much your car’s value has or is likely to depreciate by, there are many online calculators you can use, such as: The Money Calculator.

What factors affect a car’s value?

The main factor affecting car depreciation is the age of the car. The biggest depreciation, as shown in the above graph, happens in the car’s first month, then its first year.

Cars around 2 to 3 years old tend to hold their value a little better, but their value starts to decline again as they reach 5+ years. And pretty much reaches a standstill by the time they’re 8 years or older.

Which car brands hold their value?

The second factor affecting car depreciation is the make and model of your vehicle. Typically more popular car brands will hold their value, due to a higher demand for that type of car, as a result their depreciation is much slower.

Unsurprisingly, the higher end car brands have the slowest depreciation in 2021 (according to WHATCAR? ), these include:

The regular car brands with the best resale value (according to Autocar) include:

What is it about certain car brands that make them hold their value? Essentially, it’s the car’s perceived efficiency that slows its depreciation, because a car that won’t cost you the earth to run, has great fuel efficiency, is reliable and low maintenance, is a desirable prospect to most people.

Cars that are cheaper to run will always be a popular choice amongst today’s buyers, meaning as demand remains high, so too will their value.

What can you do to maintain a car’s value?

To be honest, there really isn’t a whole lot you can do to prevent a car depreciating, because when it comes to the brand of your car and the age of it, there is nothing you can do to change that. However, being a good car owner will help: